This year, for a number of different reasons -- including some nearly valid ones -- Christmas hath crept upon us as a thief in the night.

This means that a lot of stuff we normally do (i.e. that we do NOT fail to do) has gotten done late and amid much rush, with imprecations muttered under the breath. At least from my end of things. In my beloved's case there has been much motion -- none of it forward -- which allows her to labor under the misconception that movement equals progress.

Because I am a fairminded sort, I shoulder half of the Christmas burdens. One task which was mine this year: the Making Room Thing.

For those of you "who cannot be arsed" to click, this is the day when we gather all the $#!+ toys accumulated since last Christmas, inspect ruthlessly and donate the stuff that simply isn't being used. People who oughta know better say Advent's not a penitential season (minor or otherwise) but will readily agree it is a preparatory season in which the believer makes room for the Holy Child. And making room means making some #$%&ing room. (Something that should be part and parcel of this set of beliefs is a "detachment from material things." That doesn't mean these are bad, just that we shouldn't develop an attachment thereto.)

Anyway, the stuff that is in new (almost always still in the original cellophane wrapping, to boot) is rewrapped and put under St. [Insert saint's name here] Church's "Giving tree" and will be given on Christmas morning to the underprivileged children in the poorer areas of our fair metrop.

(The other stuff is just donated in bulk. But that's another post for another Christmas.)

As a consequence of my worldview -- which may or may not be a particularly unique one -- I am of the mind that we are our brother's keeper and that task is (watch this closely, here) an individual moral obligation. So, it behooves me to actually do* something for my fellow man. It is also important for me to make sure my children actually latch on to the concept, as well. No matter how rough you have it, someone always will be worse off and if it is within your power to help, then help.

Also, because it was my turn to handle this task, I was a bit more...um...ruthless. Appeals to my pity to spare the FIFTH box of K'nex building sets, or the FIFTH Monopoly game or the SIXTH through NINTH Play-Doh playsets, etc. all were as seeds which, in the rocky soil that is my implacable will, could find no purchase. Off they all went.

You simply would not believe, if I told you, how much stuff (new, never opened, never given a glance since Dec. 25, 2007) was hauled away.

So here are some photos, that ye may believe indeed. 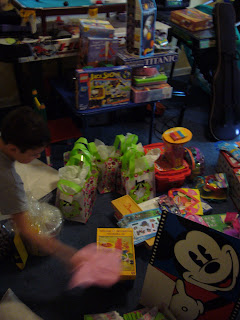 This is about 30% of the way into the packing extravaganza. The rules are the gifts must be wrapped and must state whether the gift is for a boy and/or a girl and the appropriate age range. 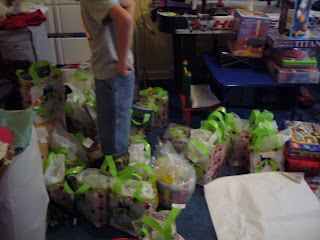 Here we are about 2/3 packed. Eagle-eyed readers will note those small bags were the ones I used as goody bags for TFBIM's party last year. (Glad the eBay seller sold me a gross of them!) 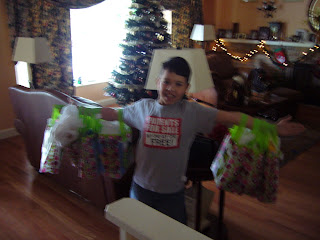 Here we see NOS carrying out bags aplenty on either arm. Eventually we had to make two trips.

And, here are gratuitous shots of our living room mit der tannenbaum 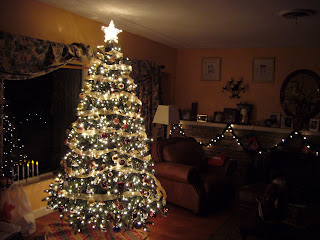 And a gratuituous shot of a test run of the tablescape in progress. 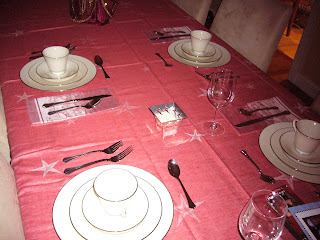 So there you have it.

* as opposed to "supporting something being done"

Poppy Buxom said…
All I really know is that with Protestants, it is an article of faith that in English, the infinitive includes the word "to."

As in "those idiotic Protestants ought to know that Advent is a Penitential season."

Joke said…
1- Y'mean like: "My idiotic friends ought to know I meant to type oughta but my typing skills are abysmal."?

2- To whom ought I donate your children?

Penitentially (in a minor way) yours,

shula said…
Actually, having just something not entirely dissimilar myself, I WOULD believe it.
6:59 AM, December 24, 2008

Joke said…
The cool thing is that it felt pretty bloody nice to give all this stuff to kids who otherwise wouldn't have $#!+ on Christmas morning.

I was really trying hammer that point home. It took some time for, say, NOS to realize there are children who won't get enough food on Christmas day, never mind a toy or two.

"NOS, that little Crayola coloring set that you packed away could be the ONLY thing some poor boy or girl will get. You have been blessed with a lot: a roof, food, friends and family, a great school, good health, etc. Not everyone has been given that, so it's up to you to share your blessings."

Poppy Buxom said…
If you hurry, you ought be able fly Chicago and donate one child apiece two needy Miamians.

Before the minor Penitential season is over.

(Please blame my scrambled syntax on Gallileo Gallelei. He might be off the hook for the theory of heliocentricity, but it's an article of faith for Protestants that he's responsible for everything else, including climate change, New Coke, Vatican II, and Cool-Whip.)
2:17 PM, December 24, 2008

Joke said…
1- Galileo got in trouble not for his theory, but for pissing off someone at the Holy Office. Natch, that makes poor copy.

2- Your syntax is forgiven. Upon whose tab ought I put your spelling?

3- Any donated male child will have to submit to Hair & Wardrobe Conformity. Feel free to wield that as a threat.

Will think of a suitable menace for the female child.

Joke said…
This conformity is enforced via something like this.

LBA said…
You are very cool.
Reading this post made me feel both happy and proud - it is a good thing for your kids to learn ( but man, the stuff, the stuff - that's a LOT of stuff )

I too hate stuff, and accumulations and the me-fest some people feel is their God-Given right at this time of year.

We also pack up and donate.
It feels so right.