Well. There may be more than one reason why I was all by my lonesome at breakfast. Some of you might assume, with what I would consider sound reasoning, that the bulk of the population of TotC simply cannot manage to assume a vertical status, never mind an ambulatory one, at such an early hour. Even with the enticement and allure of the Kahlua Coffee Bar.

This is perfectly valid thinking. 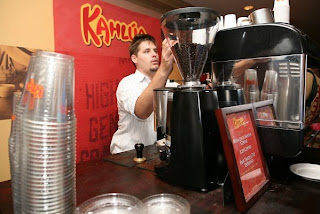 There may be another reason, into which I will delve and report any findings. This reason is encapsulated by the phrase Absolut Bloody Mary Bar. While I yield to none in my affection for a caffeinated jumpstart to my day, I am also among the greatest of admirers of the Bloody. (For further details, please see my published works.) So I suspect many among the hardier exemplars might make a quick dash for some caffeine-fueled first aid, and boost their operational range by consuming sweet nature's tomato-based restorative. Even those who court the lovely and gracious Badger's wrath by slagging on vodka.

Something else has captured my attention, as I stop to ponder things in the time allotted between seminars and symposia, when lesser mortals swig desperately at bottles of Fiji Artesian water in an effort to keep their embattled electrolytes in homeostatis. This something else is this: TotC runs FIVE days. Five FULL days, really. (July 21, 22, 23, 24 and & 25) There is some putative respite by having awards ceremonies, but I am not fooled.

My strategic advice? Consume only what's placed before you and only finish which taste you enjoy. The more innocent among you will be stunned to learn there are not a few people among the assembled who are not necessarily exhibiting optimal levels of temperance. (Ahem.)

Anyway, Day 3 (hey, give me a moment...it isn't easy to rummage through ill-cobbled notes!) featured the expected cavalcade of events:

The aforesaid Bloody fest, leading directly to what strikes me a particularly posh academic 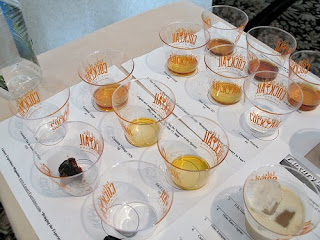 discussion on being an empowered agent of change: "Armagnac, France's First Brandy." Now, although Cognac is France's most exported brandy, Armagnac is its most popular among the French. I think Team Armagnac's suffering a bit of an (unwarranted) inferiority complex. But "Alain" is doing a good job of explaining the differences in terms the pros and the (hi!) laity can grasp. There may have been a great deal of emphasis on "terroir" and soil alkalinity, as muddling through a Lilliputian browser window as tasting samples are being distributed tends to distract even the most seriously-disposed attendee.

(Normally, I would have attended Jeff "Beachbum" Berry's presentation, but he had run that one -- on a fascinating character named Joe Scialom who was pals with Churchill, had a doctorate in chemistry and spoke 8 languages -- a few weeks earlier at The Hukilau in Ft. Lauderdale. Also tempting was the Honey & Smoke event with Irish whisky and Zino Davidoff cigars, but even I know better than to partake of straight whisky and cigars at 10:30am.)

This led all concerned into the lunch hour. The seemingly wiser members of the contingent (hi!) headed over not to a Spirited Luncheon, but to "Bax vs Clift: Progressive Cocktail/Cooking Techniques from Tippling Club & Der Raum." To those who have been pacing themselves carefully, an opportunity to further pace themselves with something less taxing to the liver and digestion at the time of the midday meal is a welcome opportunity. Frankly, I have NFI what "Progressive Cocktail/Cooking Techniques" really means, but the subheading promised it would be Asian, award-winning and at "the Riverview room" and that sounds like far more incentive than my willpower can overcome.

I am, after all, merely flesh and (rather diluted, by now) blood.

This seminar, run by some rather jovial Aussies flush with Singaporean funding, turned out to be rather...molecular. Lots of VERY deconstructed things. Most were...um...interesting. Some were...er...not my thing. This seminar was packed and, frankly, I doubt many thought skipping the more conventional luncheon was a wise decision. (A smoke infused Scotch drink? "Tastes like a Marlboro made into a beverage" is more like it.)

Now, if you attend this seminar not only do you forego the Spirited Luncheon, you also forego the Great Vodka Debate. Two cocktail experts for, and two against, slugging it out on the relative worth of vodka. If your mind is pliable, perhaps this is for you.

Anyway, the problem is that if you stuck it out the whole way with the molecular Aussies it would certainly feel as if they had fed you but a mere molecule. If that. (Even when you pace yourself, you still need something to cushion your system, yes?)

Decision time. The molecular Aussies are playing to a very packed crowd and so the truly wise among the teeming horde (hi!) decide to bail out, while there is still time to make the Spirited Luncheon. My thinking is that, if one is going to have a Very Late Evening, where food is likely little beyond the odd canapé, then lunch should be of impressive proportions and staying power.

The decision, then, is a no-brainer: Dickie Brennan's Steakhouse for The Spirit of Texas lunch. The only drawbacks, and they are small, are that it's PACKED, I have no idea what the cocktails are going to be and I'm not even sure there's going to be a "pairing" thing, and while undoubtedly delicious, it's not going to be particularly fancy. But I don't mind. Look: 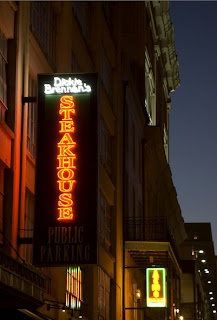 2nd COURSE
Mesquite Grilled Prime Ribeye
Prime steak served with jalapeño and cheddar mash, beer-battered onion rings -- shatteringly crisp is ideal -- and ancho chile & honey BBQ sauce. (Sauce struck me a superfluous and I didn't bother with it.) Leidenheimer French Bread Texas Toast also, which is kind of hard to describe to someone who's never had "Texas toast" before, but it's nice.

DESSERT
Pecan Pie
Drizzled with caramel and chocolate sauce and served with sweet cream. (Sauces seemed to me a bit of overkill. But I would have eaten two.)

The spirited part is a highlight of Texas distillates (Tito's vodka, Paula's Texas Orange liqueur, Treaty Oak Rum, Corazón Tequila -- how's THAT from Texas? -- and other spirits I didn't catch, because OMG you would not believe the din. The margaritas are appreciatively downed with all the chile stuff going on.) 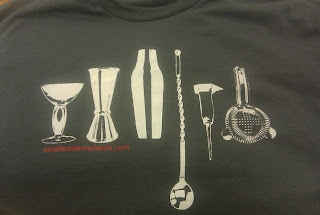 That crisis solved, the time comes to go to the happy hour for The Cocktail Spirit (a web series on SmallScreenNetwork.com) in preparation for dinner. This is preferable to me over the pool thing because a) I'm not all that hopped up about pools, b) I'm not that hopped up about Pama and its compatriots, and c) TCS is giving away free t-shirts.

Having accomplished my mission, the natural thing to do is to skip around to see what events catch my eye. Grappa! There is a grappa thing. I figure grappa = Italian = food. Never mind that by this point I am quite satisfied. That leads to Russian Standard's vodka tasting (Russian-style) which is quite nice. Especially since they are doing it in an authentically Russian way.

It may surprise you, but I decide to take a nap after this wraps up around 6pm-ish, figuring to be well and properly rested for the long night ahead. Small problem is that I wake up at 6:50am.

Joke said…
Yep. The first day (Wed.) is geared more for the professional in the industry, with "breakout sessions" on scintillations such as inventory control, PR, that sort of thing. As time marches, there are fewer of those and more of the "tasting" sessions. But yeah. 5.
9:31 AM, July 25, 2010

Badger said…
Did you try the Treaty Oak Rum? I personally do not care for it. It's not that it's BAD/unpalatable, it's just that it doesn't taste like RUM. It is a very neutral spirit. May as well be drinking vodka OH YES I SAID IT.

I didn't get to taste it straight up. All potables came out already cocktailed. I got something pale yellowy (trying desperately to find the name, as I didn't catch it in the deafening din of it all) and it tasted nice.

Badger said…
It sounds as though if I DID come I would have to drive (not undoable), seeing as how I'd have to bring certain items upon which the FAA frowns.
9:01 PM, July 25, 2010