After much effort, toil, angst, deliberation and frenetic Craigslist-surfing...I managed to get the very first component towards my (eventual) Tiki habitat. I managed to buy a bar and (I think) a pretty bloody nice one at that. It has only a couple of tiny dings and chips, but nothing that even someone as manually unskilled as I can't set right. Those teeny flaws aside, it's practically new.

Below is the "overall view" of the beast. 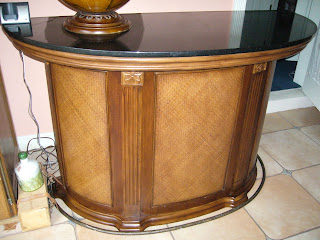 It weighs a TON...that slab o'granite top does not help and, even worse, makes it ridiculously top-heavy when all you have are one and a half men (me & NOS) to schlep it from the wifely minivan to the back room via the obstacle course of a hypercluttered garage, tall steps and rugged lawn terrain. Even worse when the grownup in the equation is supposedly down with the flu. But I am nothing if not committed.

Or, perhaps this is proof I should be.

I'm slightly embarrassed to state in public how little I paid for this thing. I spotted it on CL and it was being sold by a storefront church which seems to have been using it (probably donated, I'm guessing) as a hallway table. All of the other semi-acceptable bars I had seen on CL for the last year -- did I mention I was patient? -- were running in the $150-$300 range and this was not only FAR nicer, but also FAR cheaper. When I got there I was pleasantly surprised to see it more "tikiable" than I expected, with rattan-like panels and a workable color. It's supposedly a Bombay Co. model, but it has a Tommy Bahama-ish kinda feel to it. (See next) 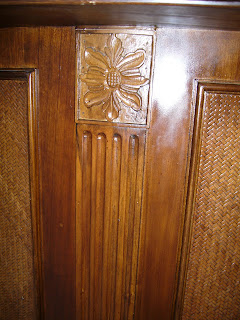 Above is a closeup of the ornamental detail. (See what I mean about the Tommy Bahama thing?) So the question is this: How could I tikify those column-ish/rosette things (they look like they will pry off cleanly and relatively easily)? I was thinking of a shallow-ish set of wooden plaques with something (anything!) more tiki-ish, and possibly replacing those grooved columny details with something bamboo-y.

And, of course, placing a proper tiki dead center.

P.S. For those who are interested in following the progress of my eventual tiki habitat, be warned...this will go GLACIALLY slow, as I have very little in the way of time and even littler in the way of DIY skills and even littler than that in $$ my beloved wife will allow me to spend on such a project. Even if the projected space is the size of a medium phone booth.

Poppy Buxom said…
I think the bar will be great, and you can tiki it up with accessories. Like grass cloth on the walls behind it, or a thatched roof over it. Or just a shitload of rum drinks in themed glassware on top of it.
11:55 AM, September 24, 2010

Courtney CFG said…
Try Tanduay rum from the Philippines. It might not be as good as some Caribbean rums, but it's a great conversation starter about sugar barons in the South Pacific.

Joke said…
Paola, "Tiki" is a sort of Americanized (some would say Disney-fied) mixture of assorted Pacific cultures. It is NOT authentic Polynesian and it is not meant to be.

Courtney CFG said…
I am very alive and operating semi-covertly in the islands. A lot has changed since the turbo-blogging days of 2004, but I'm hoping to get some great Joke material whilst I lurk in the wings and avoid Dengue fever.
9:34 AM, September 30, 2010

Major Bedhead said…
I suppose you could replace the rosetta things with hibiscus flowers but I think gussying up its surroundings sounds like a better idea. It's a nice piece as is and could work as is in a Tiki setting.

My word verification is puise. Which makes me think of a pouilly fuise. Even though I have no clue what that is. Or if I'm spelling it properly.
9:00 PM, October 20, 2010