Now the formidable Doug Winship, arbiter of all things Tiki during February, has kicked things off officially, and on the heels of my previous post, I wanted to go into a preliminary explanation about the Trader Vic's Rum Keg experiment. 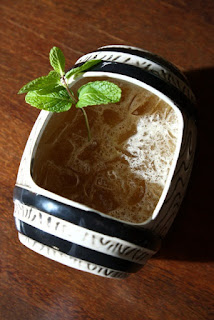 Reading Vic's own words on the matter confirmed my suspicion that scaling a recipe up or down is, at best, an imprecise thing. As a result, with a handy Tasting Panel®, er, handy I made full-on Rum Kegs with the souvenir vessels I got from Trader Vic's. The problem is that those clock in at 64 oz (call it 2L for you metric types) apiece. This means that such a vessel is often sloshing around with a consignment of 12 oz -- let that register for a second -- or 350ml of rum at any given moment.

But wait. The rums ("dark Jamaican" and "light Puerto Rican," as noted in all the recipes) Vic would have used back then all weighed in at 89-90 proof. Today these are only 80 proof. So, to get to the Oh Gee version we'd have to figure out a workaround. For the light PR rum we could use Bacardi Heritage or Caña Brava which are at 89 proof and 86 proof, respectively, and the dark Jamaican could be a homebrew blend of Coruba or Myers, Plantation OFTD, Hamilton Jamaican Pot Still (Gold or Black, whichever you can score, the latter being preferable), Smith & Cross, etc. (Although Jim "Hurricane" Hayward's preferences lay elsewhere, my preference is 5:1:1 Coruba, Plantation OFTD & Hamilton Jamaican Pot Still Black.)

Or you could just use "regular" light PR (or an equivalent) and "regular" dark Jamaican, but at a somewhat higher dose so that you're using slightly more to compensate for the low-octane versions with which we are saddled today. (I'll show you the math next time.)

Then we have the issue of the passion fruit. Some legit recipes call for syrup, others for nectar, others for pulp. What brand of apricot liqueur/"brandy" is best? Ditto the sugar syrup and lemon issues, as mentioned last time. Then there's the issue of ice and blending. How much is "a scoop" of crushed ice? Some recipes specify a drink mixer, others a blender.

So this is why this subject has been circling around my brain (and liver) since late November.

And I'll leave you with this. When I looked into the Scorpion Bowl last year all of the usual suspects had the same gripe with it: Citrus Riot. In ALL the many authoritative Trader Vic's Rum Keg recipes you will find, lemon juice is the second most prominent ingredient (4oz) after light PR rum (5oz). So that's where the first experiments took me.