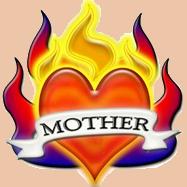 Mothers Day hath come and gone and all has gone swimmingly.

We (i.e. the whole mishpocha) went to an overpriced brunch buffet thing that was somewhere between "not bad" and "so-so" and that went OK. I mostly sat at the kids' end of the lo-o-o-o-ong table, ostensibly to make sure Mr. Finicky (i.e. NTS) ate his french toast with "breakfast" syrup* and bacon.

TFBIM socialized with her SiL and SiL's sister, and my MiL and my BiL's MiL and TFBIM's SiL's MiL and SiL (getting all this down? need a chart?).

Iberically speaking, Mothers Day is a loot-intensive affair. Some populations just bestow a gift on one's mother and leave it at that. Maybe a grandmother, if she's beloved enough or if she's old enough and a little not-quite-with-us and you feel bad. But generally the thing stops there. Not here.

The protocol ovah heah is to hand out loot to all the mothers in your life, regardless of whether or not they're your mother. F'rinstance, we imparted loot upon my mom (more on her in a sec), my MiL, my (only) aunt, both of TFBIM's aunts, my sister and TFBIM's SiL.

The touching moment of the weekend was when NOS dipped into his allowance money and went to the school's store (don't ask) and with his very own $5, bought TFBIM a little plush tiger. This was entirely his idea and never even consulted, asked, collaborated or otherwise sought my input. TFBIM was all verklempt. TFBIM also got this Mikimoto earring ring set so she was happy. If you're tracking at home, Mothers Day is a "C" level gifting day.

My mom, being the smartest one of all, feigned some unclaimed malady and skipped out on the brunch. So we went to my parents' house after Mass to bestow giftage and generally have my mom bask in the adoration of her son and grandsons. We got her an Ionic Breeze thing (only it's from, I think, Honeywell) that also has a fan with settings such as "Gale" and "Category 5" and A REMOTE CONTROL. This is because my mom's two greatest annoyances are getting up to do anything and having the temperature anywhere north of "beef aging locker." She also got some Waterford baubles, for her girly side.

So she basked, and basked and then we left. She didn't have to clean up, wait in line, deal with waitstaff and still got her loot. Like I said, smartest of the bunch.

For those of you who are new, I LOVE my mom. This doesn't make her perfect, because she has kind of a secret selfish streak, and has earned a black belt in Passive-Aggressive. But she has a brilliant smartass sense of humor, an ability to remain unstressed (if she had been on the Poseidon Adventure, her attitude would have been one of "What? Just a midnight swim, is all.") to the point of seeming pathologically phlegmatic. She is tenacious, loyal, fanatical about detail and imperturbable.

I got many of my best qualities from her (and some of my worst, such as that weird Krazy-Straw shaped gene, responsible for my collecting weirdnesses) and she was the ideal sort of mom for me growing up. I needed to be left the Hell alone and she needed peace and quiet. Worked out beautifully.

My mom doesn't overly spoil the boys, gets along really well with TFBIM (only a couple of things get in the way of this being upgraded to "perfectly") and with her family. She also brings excellent longevity genes to the picture (everyone on her side of the family died in their mid-90s or later), so it's a good thing she's well-liked. She also has a ridiculous independent streak, and doesn't ask anyone to do anything for her, if you discount asking me to set all those cheap-ass, little dinky digital clocks she has loitering all over the damned place.

Not that she reads this (or any) blog, but I love you mom!

* The existence of thisnudge-nudge-wink-wink ersatz maple syrup is ample cause, in my view, for the whole of New England to justify seceding from the Union.

BabelBabe said…
this mother's day is bringing out the sap - first Badger, then you....pun absolutely intended as my next comment is: why waste real maple syrup on children? My boys could not care less - they just want SWEET - and as real maple syrup is upwards of 8 bucks a bottle...why waste it on the young?
9:23 AM, May 15, 2006

Major Bedhead said…
My daughter, brilliant child that she is, cannot stand that fake crap. No, it must be real and by god, she'll take a whopping bolus of insulin to cover it. "I'm not eating that flavoured corn syrup garbage. Leave that for the boys." That's my girl.
11:13 AM, May 15, 2006

Joke said…
Bab, the maple syrup is not wasted on the young, because that corn-syrup dreck is something they can't stand. It is, to quote NOS "Sticky, icky and gross." and he gave the pancake/waffle station a mighty wide berth.

Julia, you have a Mensa kid on your hands, and one who has her priorities right.

MsCellania said…
My boys want real everything. They spurn margarine, corn syrup masquerading as maple syrup, popsicles that aren't whole fruit, and juice that isn't dredged from fruit before their very eyes. Milk served from waxed cartons gets turned-up noses, even if they don't see it poured into their glass from a carton v. a bottle - they KNOW.

And it's okay with me.

I love that your mother held court as she should on her day. She was, as we would say, the Big Mama that day. She started it, after all. I think the sweetest thing TFBYM received was that plush tiger, and hey! it went into the school slush fund!

I used to claim I only got my shortcomings from my mother, intimating that I hatched my talents on my own, nothing nature or nuture about it. Now I know better. Our mothers honed us into the unique beings we are, and we are doing the same to our offspring. God help them.
9:37 PM, May 15, 2006

blackbird said…
'breakfast syrup' is the reason I may be stopped at customs next month.
I'm bringing the real thing, to the vacay island.
2:01 PM, May 16, 2006