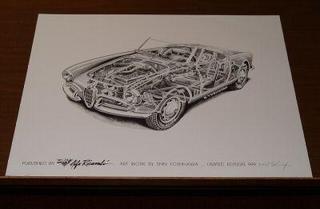 The assignment has been issued. Photograph and post one's artwork is the task for Friday's Photo Meme. BB will explain this is not a meme, but then again, this isn't Friday, so we must learn to take the rough with the smooth.

Here we have the 1st of 3 lithographs by a guy named Shin Yoshikawa. I could only find 2 of the 3 I own, but then again it took me since Friday to find the camera-to-computer wire thingy, so don't be an ingrate. The car in question is a 1957 Alfa Romeo Spider Veloce, and, should you be lucky enough to find one, a mint example will set you back $100K and even an average one will run well into the mid -fives, so be grateful that the super-duper Artist's Proof series is a mere trace amount of that. 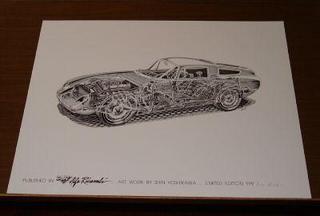 Under that light, this other litho is an outright steal. The astute among the 193 of you will notice this car is the one I highlighted in my entry on the car museum thing. You don't want to know what one of these will set you back. Hell, you might not even want to know what one of these would have set you back 5 years ago when the last one showed up at auction. (Well, maybe you do.)


It is at this point, natch, when Blogger does its impression of Balaam's ass and refuses to upload any more photos, prior to choking. Which is not exactly what Balaam's ass did, but then again, Balaam got to smack the recalcitrant beast and I have no such recourse. So, rather than letting Blogger "puke a rod through the engine block" I figured I'd quit while I was ahead, and live to blog another day...or at least put the rest of this entry into separate posts.


anyway -- those prints are extraordinary.